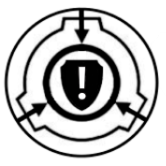 List Of Wounded, Missing, or Killed Personnel: Some MTF and SID.

A portal appeared right outside surface gate, SID were called up and organised into groups, I was one of the few that was slated to enter the portal with a couple of MTF and other SID, We entered the portal wearing head cameras but once inside of the portal the connection cut, some of the group was also separated with 2 being teleported to a different place. The scenery could be described as night-time in the middle of a forest with a blue fog, in seemingly the middle of nowhere. After looking around for a bit we saw a broken down APC and some sort of one story building with a side tower that you could climb into and an abandoned garage.

We first went down into the abandoned garage and looked around, We found a car that had some russian symbols on it leading me to believe that this was somewhere in an alternate Earth, we moved towards the entrance of the abandoned garage where I stood guard. I didn't see too much as I stood guard, though I do believe they found a rotting corpse inside and a toolbox with some common tools in it.

Afterwards we moved towards the main building, on the way there we heard a russian man speaking over what sounded like a public radio, I faintly remember there being talk about finding a radio but I can't remember if it was in the garage or the main building. Inside the main building, which seemed to be abandoned we found several rotting corpses, a doll made of some normal fabric and other common household items, the backdoor also seemed to have been blocked by a cabinet, perhaps the people living in this building tried to bunker down.

We moved on to the tower and spotted the second team further down along 2 big pipes that seemingly went on forever due to the fog. One SID accidentally fell and broke his leg in the progress of this getting down from the tower, he was given medical aid and a splint. We regrouped and was told by the secondary group about some sort of bug creatures that they found, the creatures were hostile.

We proceeded to move over a shoddy made bridge that consisted of pipes and metal with water below it, towards where the secondary group last saw the creatures. On the way there we saw a small village consisting of 2-3 houses and a billboard that was tipped over, we proceeded down towards what seemed to be a lake and spotted the creatures, they were huge giant blue bugs a bit reminiscent of 682 when looking at them from afar, closer up you can see more of their features and they become harder to describe.

We proceeded to terminate the bugs as we moved towards the lake. In the lake was a giant ship beached on land with a bit of water around it, some green bugs that exploded when shot was also on top of the ship. The water was extremely nasty looking, thinking back we should have taken a sample.

We moved towards a ladder that led up to the ship before getting the order to retreat from MTF Kilroy as he had noticed earlier that the portal that he came through was getting smaller over time. I began moving back towards the village with Kilroy where we spotted a giant red bug, bigger than any of the previous creatures. We began shooting it as it spewed flames out of its mouth. After several M203s the beast went down. We regrouped at the village and I attempted to take a sample of the beast using a knife, however when cutting into the beast my knife began melting and time was running out. Kilroy gave the order to leave through the portal which some of us quickly did. We had to duck to get through the portal at that point so its safe to assume some of the others in the group were left behind.

Has this issue been resolved?: N/A

Could this Incident Have been avoided?: N/A

Member
// fucked up the tags so @SparkZero @O'Connor @Schulze

Defron said:
// fucked up the tags so @SparkZero @O'Connor @Schulze
Click to expand...